The Today’s PA survey is back!  And this year the response has been incredible.

As always, our annual survey attracted replies from across the PA world, providing a snapshot of what is happening in the industry, both in the UK and abroad.  And, as usual, there were a few surprises!

But we weren’t prepared for the overwhelming number of respondents, giving us our largest ever insight into today’s workplace.  After the events and the disruption of the last 18 months, we were keen to see the effects of the pandemic, and how things had changed – and what, if anything, had stayed the same, for office professionals.

We will be looking at the results in detail in the over the next few weeks but, first, a little background information on those who took the time to share their views.

Over 500 PAs, EAs, and other support professionals completed the survey, and despite the fact that approximately 380 were from the UK, we attracted more overseas respondents than ever before.   European PAs made up 9%, and North America a further 6.4% (24 from the USA, 8 from Canada), with the remaining 5.8% from the rest of the world including Australia, South Africa, Philippines, and Mauritius.   Our survey truly has a global reach!

By far the majority of replies (60%) came from PAs working in the private sector, compared with around 30% from the public sector, and 10% in the third sector (non-for-profit, voluntary, or charitable organisations).

As well as sectors, we asked our PAs what size of organisation they worked in.  Most worked in large businesses with between 251 – 5,000 staff, with these, again, being mainly in the private sector.

This spread of sectors and of size of organisations makes interesting reading alongside our next two questions:

Have you returned to the office?

A small number of UK-based respondents (in a mix of private, public and third sector business) said that they were working in their offices throughout the pandemic.

For the rest of respondents, the pie charts show the splits in clearer detail: 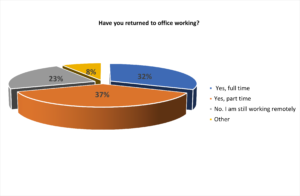 Will you be returning to the office? 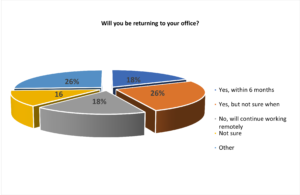 Around 4%, from across all sectors and all sizes of offices, said they would be returning in some form of hybrid or blended working.  This ranged from one to four days in the office each week on a regular basis to working on-site as and when needed (for instance, when their manager would be in the office).

However, 27 said that they would be working from home for the foreseeable future, or have moved over to this way of working permanently.  This was mostly within the private sector (16, as opposed to 9 in the public sector and 2 in the charity sector), either because their role was now completely remote or the company as a whole had adopted the remote-working model.

Across all industries, remote working for staff – including support staff – has been on the increase for several years as businesses make use of technology and adapt to employees’ requests for flexible working.  During the last 18 months, it seemed that Covid would greatly accelerate this change, with the media reporting that organisations would now start to close down their offices, turning city centres into ghost towns.

Although there has been a significant change in our working habits, reports that most of us will not be returning to the office do not seem to be borne out by our survey results.

Today’s PA is hiring a Sales Executive to grow its worldwide business in 2022 and beyond. Your role will be to prospect new opportunities, pitch to prospective clients and close new business. You will have the support and training of our MD as you learn the details of our service...
read more
04-02-22

Whenever we ask Assistants to describe the main challenge they face in their role, there are usually as many different replies as they are respondents!  But on looking at the answers for our 2021 survey, two answers leapt out at us. Changes - in role and/or responsibilities (31% of respondents)...
read more
21-01-22

Assistant Skills for a Post-Lockdown Workplace

There is little doubt that the post-lockdown workplace requires a different set of skills from the ones we previously relied on. Whether in a hybrid-role ourselves or dealing with others who are, we need to look at new ways of working. When we asked our Assistants which particular skills they...
read more