Effects of the Pandemic: How Has the Assistant Role Changed?

Last year, when many countries went into lockdown, we were all suddenly forced to adapt to a new way of working. Now that many of us are back in the office, we wanted to know what (if anything) had changed for our Assistants in the last 18 months.

More than half (56%) said that their role had changed – and from reading the comments, changed significantly.

For some, this change meant working from home or hybrid working on a permanent basis, helping them to achieve a greater life/work balance. However, for others, the change was not as encouraging.

Looking at the split between sectors, the picture is most striking with regard to those in the private sector (note: we had more respondents from the private sector than the other two). In all, 146 respondents said their role had changed, as opposed 106 reporting that role was the same as before the pandemic hit.

Within the public sector, there was also a gap, (a total of 70 as opposed to 54), but within the third sector the split was almost equal. 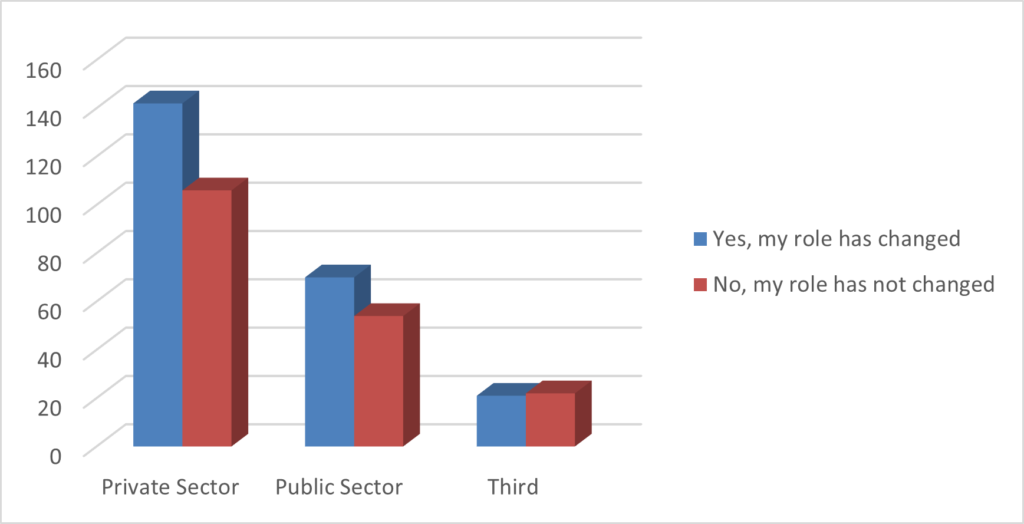 For some respondents, the effect on their role were mainly positive, with comments highlighting:

The move to flexible/WFH/hybrid working.

It was felt that this offered not only a break from the daily grind of commuting but provided a better and healthier life/work balance at a time when it was needed.

Change in the nature of the work.

It was noted that managers were becoming more ‘self-sufficient’ with regards their own admin. And with less to do regarding travel management and diary management, Assistants reported that their workload was now more varied, with time to be more creative within their role, and become involved in other projects.

Whether within or without the organisation, it appeared that for several Assistants, their role changed for the better. From changing employers, changing jobs within in the same company, or taking on new responsibilities, many respondents felt they had taken on a new challenge.

Unfortunately, across all sectors, there were many Assistants who found the changes had been overwhelmingly negative.

From the comments, there appears to be two reasons for this.

Firstly, a reduction in staff numbers (through redundancy or restructuring) led to others in the organisation dealing with a much heavier workload. This was by far the most common observation. Secondly, as the pandemic reduced tasks related to travel, diary management, and event organisation, Assistants were given other responsibilities. However, as the work situation has returned to normal, Assistants still have these additional responsibilities to cope with, on top of their usual duties!

This is a common complaint. Not only did many find that working remotely was much more time-consuming, but it also created a definite communication gap between Assistants and managers and colleagues. Together with the total reliance on technology for meetings and communications, it resulted in frustration that tasks were taking longer, and a feeling of being less efficient in their role.

Whether fully WFH or a form of hybrid working, Assistants felt that there was more pressure, not less, and a feeling that they were now expected to work longer hours to make up for time not in the office.

The number of Assistants dealing with both the negative and positive effects – and the range of effects – is a surprise. But it is important to remember that, as with all surveys, the results show only a brief snapshot of the situation at a point in time.

However, from the results, we can see that, for office support professionals, it is still far from ‘business as usual’.

Today’s PA is hiring a Sales Executive to grow its worldwide business in 2022 and beyond. Your role will be to prospect new opportunities, pitch to prospective clients and close new business. You will have the support and training of our MD as you learn the details of our service...
read more
04-02-22

Whenever we ask Assistants to describe the main challenge they face in their role, there are usually as many different replies as they are respondents!  But on looking at the answers for our 2021 survey, two answers leapt out at us. Changes - in role and/or responsibilities (31% of respondents)...
read more
21-01-22

Assistant Skills for a Post-Lockdown Workplace

There is little doubt that the post-lockdown workplace requires a different set of skills from the ones we previously relied on. Whether in a hybrid-role ourselves or dealing with others who are, we need to look at new ways of working. When we asked our Assistants which particular skills they...
read more